In 2010, less than two months after having spent 13 days on an exhausting late-April photography trip to North Carolina, Ruth and I decided to spend five long days photographing in Wisconsin and Minnesota. We were both working stressful Information Technology jobs at the time and all I can say now is, “What were we thinking?!” We worked hard, but we came home with photos of so many incredible places, including the Delta Diner, which is in the Northwoods of Wisconsin. 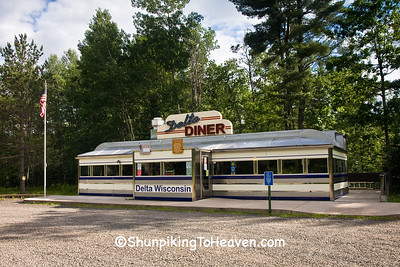 We usually try to start photographing at first light but, having worked the day before, we didn’t leave home until late Friday morning. We took the highways about two hours northwest and then turned north, shunpiking and photographing our way along the backroads to Superior, Wisconsin. We ended that day photographing Wisconsin Point Light on Lake Superior. It was extremely windy and the lake water was brown due to previous storms. 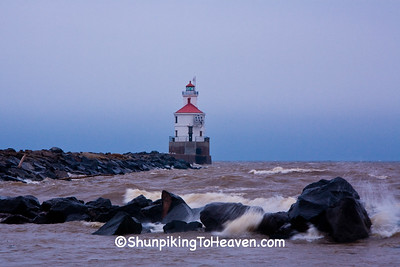 We spent the next two days exploring on the backroads of several Minnesota counties in the northeast section of Minnesota, going as far north as Grand Marais, which is close to the Canadian border. We began heading south on Highway 61, late on the third day of our trip. Highway 61 runs along the Lake Superior shoreline. We ended that day having a picnic supper at Split Rock Lighthouse State Park. The next morning, we were at Gooseberry Falls at dawn, in a fairly heavy rainfall. And I must express my gratitude to Ruth, who hiked with me to the falls and held the umbrella over my camera equipment while I photographed. By the time we left Gooseberry Falls, the rain had let up and we explored a few sights along the rest of Highway 61. Then we returned to Wisconsin, crossing Douglas County and entering Bayfield County, traveling Hwy 13, which runs along beautiful Lake Superior. After taking a few photographs in the small town of Port Wing, we headed south through Iron River and on to the Northwoods town of Delta. There, “in the middle of nowhere,” on the site of the former historic Delta Store, sits the Delta Diner, a restored 1940 Silk City Diner.

The Delta Store, built in 1923 in the middle of the Chequamegon National Forest, was the center of activity for the town of Delta until it was destroyed by fire in 1972. During that time, you could do most of your business in one location – buy goods or mail a letter at the post office housed in the store, quench your thirst or satisfy your hunger at the bar or restaurant, or fill your car with gas from Standard Oil. 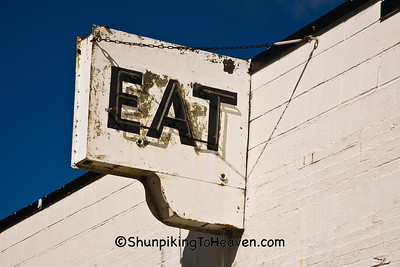 In the early 1990s, Todd and Nina Bucher left their corporate jobs in Chicago and moved to Iron River, Wisconsin, in the hopes of creating a better life for themselves. Todd had grown up, attended college, and worked in Wisconsin. After their move, Todd spent time fishing in the Delta area and often drove past the spot where the Delta Store used to stand. He was drawn to the old Standard Oil sign and small dilapidated stone building, both of which survived long after the store was gone.

In 2002, the Buchers purchased the property where the store once stood. Todd had been in love with old diners since a boyhood visit to an authentic railroad-car-style diner in Pennsylvania had sparked his interest. It had a stainless-steel exterior and an interior filled with colorful tiles and a long counter with stools.

Since that visit, he had sought out these classic diners whenever he traveled. After some quick but extensive research into their options, Todd and Nina decided to contract for the restoration of a 1940 Silk City Diner, which was delivered (with the last 10% of the restoration to be finished on-site) in October 2003. The Delta Diner officially opened less than three weeks later. 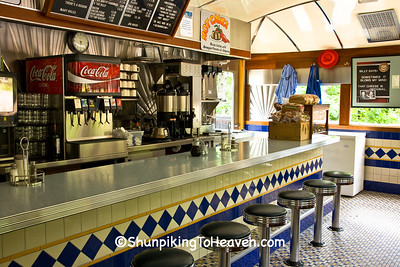 The Delta Diner was closed the day we visited. Little did we know, Nina was inside working in the kitchen. As I stood in the parking lot snapping a few photos, Nina came out of the diner and invited us in. She said that the diner was her husband’s business and that she had a small business herself, producing jars of “Jalepena Nina’s Spicy Pickled Garlic.” She graciously allowed me to take some photos of the inside of the diner.

In researching for this blog post, I now feel Nina was way too modest in saying that the diner was her husband’s business. One of the articles said that Todd provided construction and marketing skills and Nina took care of the books, the Diner Store (which was set up in the restored stone building), and some of the recipes for the diner meals. And in reviewing their website, I can see that they have worked hard over the years to expand their business. 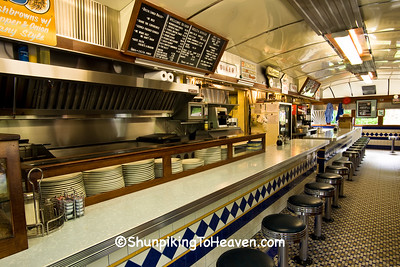 Their Taste Budz Diner Store is now serving handcrafted Wisconsin ice cream from Purple Door Ice Cream and house-made waffle cones. They also sell coffee, drinks, and diner gear. And this summer, they opened a new seasonal Jamaican-style restaurant and bar next to the diner with a goal of serving the overflow of summer customers. It’s called the Chicken Shack and Tin Tap House. The restaurant serves jerk chicken and the tap house serves craft beer from Superior’s Earth Rider Brewery. If you’re ever in the Northwoods near Delta, make sure to visit the wonderful and authentic Delta Diner “in the middle of nowhere.”

Posted by Shunpiker at 5:51 PM