Five years ago, in June, we spent three days photographing on the backroads and in the small towns of a dozen counties in northeastern Iowa. On the morning of the third day, we took a few photos in the small town of Readlyn and then headed to an old general store. Klinger Store sits at a country crossroads about five minutes south of Readlyn. The main road past the front of the store was paved, but the road crossing it was gravel. 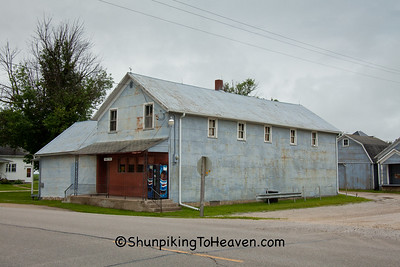 There was nothing fancy about the outside. In fact, the only things pointing to it being a store were the modern Pepsi machine on the porch of the store and a small hand-painted sign above the porch saying, “Klinger Store.” This store is truly an old-fashioned general store, sparsely stocked with necessities and a few non-essential things. One set of shelves held baking ingredients, charcoal, and paper towels. Across the aisle were light bulbs, batteries, and leather gloves. At the end of the aisle in the back of the store sat a small supply of paint, and some garden hoses. Hanging on the wall above the back door were replacement shovel handles.

On the right side of the board, it said “Misc Items” and three kinds of water softener salt were listed below. The prices seemed very reasonable to me. 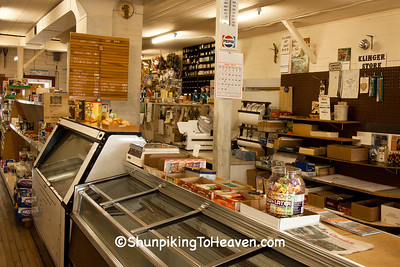 As I walked the old wooden floor towards the back of the store, which was dedicated to hardware, there were boxes and bins of nuts and bolts, screws, electrical supplies, and other hardware items next to the canned goods and below the cleaning supplies. Beyond that were galvanized pails and funnels, heavy-duty electrical cords hanging from the ceiling, a stand of Redi-Bolt steel rods, and a red tie-down strap suspended from the shelf. Hanging on the back wall were putty knives, clamps, ropes, and chains. A 6-foot step-ladder leaned in front of the merchandise.

One wall of the store was filled with shelves that held blue jeans and bib overalls. On a nearby rack were three T-shirts, two plaid long-sleeved shirts, and a yellow raincoat.

There was also an area devoted to shoes, boots, and work gloves. Packages of Hanes underwear were around the corner. 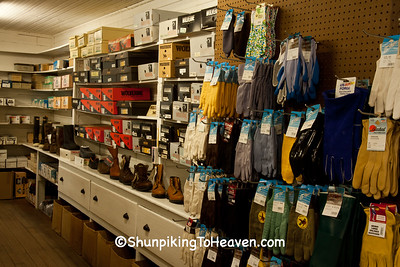 Klinger Store is owned and operated by Arlin and Patricia Poock, who seemed quiet but friendly, and they were gracious enough to allow me to take some photos of their store. As I walked around the store, I chatted with the Poocks. Arlin told me that the building was built in 1888 and that his grandfather had originally purchased the store. According to obituaries posted on the Find A Grave website, his maternal grandfather, Jacob Herman, operated the store from 1909 until 1916, and in 1946, his father, Theodore Poock, purchased the store and ran it until his unexpected death in 1959. The following year, Arlin, who had worked for his father since graduating from high school in 1947, purchased the store and he and his wife have run it ever since. In the black and white photo below, Arlin and Patricia stand behind the deli case discussing the day’s business.

In 2010, the owner of Burmester’s Grocery in Loganville, Wisconsin had told me that he was trying to keep his store open, but suppliers didn’t want to deal with him because his store was too small. So I asked Arlin and Patricia if they struggled with the same issues. They told me it was a major struggle to get suppliers to work with them. Most suppliers wanted a huge minimum order every month or they weren’t willing to do business. And even the suppliers who were driving past on their way to larger stores weren’t willing to make a stop at Klinger Store.

This struggle to stock merchandise was evidenced by the sparse offerings at the store and by the number of refrigerated cases that were sitting empty. They also face the struggles of limited clientele. As I walked past one large refrigerated case, the contents made me stop and think about how much I take for granted every day. The dairy options consisted of one gallon of 2% milk and one half-gallon of chocolate milk, four packages of cream cheese, two packages of cheese slices, a couple pounds of real butter, two kinds of butter substitutes, and a box of Velveeta processed cheese. The produce options consisted of two heads of iceberg lettuce, one head of cabbage, three bags of carrots, and a few Red Delicious apples. 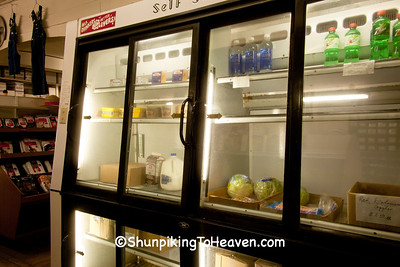 As far as I can tell, Arlin and Patricia are still in business and still managing to keep Klinger Store open. When you’re out and about in the small rural communities of our country and you pass an old general store, please stop in and support these hard-working folks. You might just come away with a newfound appreciation for what you have. Posted by Shunpiker at 6:07 PM