Last week, we showed you a picture of one of our favorite blacksmith shops with a promise to expand on that topic this week. However, because we’re celebrating Independence Day this weekend, we have decided to share some displays of rural patriotism. We’ll return with the blacksmith shops next week.

The above photo was taken on a beautiful sunny day last autumn. It was displayed proudly on the front of a nicely painted red barn in Sheboygan County, Wisconsin. Earlier this week, on our way back from photographing in northern Minnesota, we passed a farm with a large pond and a white barn with an American flag on the side.

I snapped a couple of pictures from the road, but I had a feeling that, if I was standing in the right spot, the barn would be reflected in the pond. Luckily, it appeared that someone was home in the farmhouse, so we drove in and I got permission to walk down by the pond. It ended up being a bit too windy for a clear reflection, but the view from across the pond was still a nice one.

Last September, we visited a farm in northeastern Iowa that had a large American flag displayed on the end of the barn. We spent a couple of hours there, enjoying a number of whimsical animals, which we will blog about at some point. I believe the owners of this farm had a son in the military overseas. 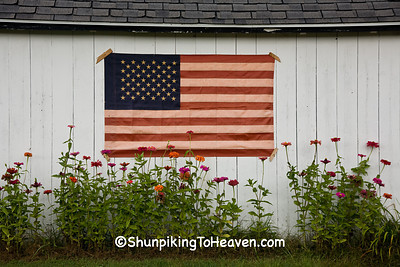 In the spring of 2009, on our way back from photographing in the Ohio River Valley, we came upon a barn in Indiana whose entire roof was a large display of the stars and stripes. We desperately wanted to capture this barn, but we realized that it couldn’t be done. The barn was mostly hidden behind a wooded area and the only way to photograph it would have been to drive down the long driveway, which dropped steeply from the highway and then went through a large stream (in other words, there was no bridge or culvert for crossing).

If it had been a dry period, this would have been no problem, but the area had suffered some recent flooding and there was no way we could have driven through the rushing stream. We turned the car around and drove past it again trying to figure out how we could capture it. I considered parking the car off the busy highway, which would have been about a half mile away, and hiking down to the barn. Even that seemed a bit too dangerous because of the size and speed of the stream. So we had to forego one of the best rural patriotic displays we had ever encountered. 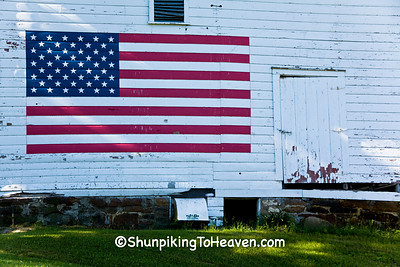 On our spring trip this year to North Carolina, shortly after we visited the Old Mill of Guilford (which we told you about a couple weeks ago), it began to rain heavily. As we passed through a small crossroads town, we saw a farm outbuilding that had three American flags displayed vertically on the door and windows at the front of the building. In spite of the rain, I couldn’t resist capturing this wonderful rural scene.

I think the most interesting patriotic scene we’ve encountered in recent years was last fall in Kewaunee County, Wisconsin. We were looking for an old grist mill and as we pulled up to the mill, we noticed this humorous scene on the other side of the road. Imagine that, a patriotic snowman, in October no less.

Ruth and I hope you are enjoying a safe and happy 4th of July weekend. We’ll return next week with a story about blacksmith shops we have discovered in our travels – we promise!

Until then, Happy Shunpiking!
Joann

Posted by Shunpiker at 3:25 PM