Ruth and I spent last weekend photographing in Iowa and we met so many friendly and interesting people who shared their property, their knowledge, and their sense of humor. One of my favorite experiences was our visit to the Candy Kitchen in the town of Wilton.

As usual, we began our day at 4:15 am and captured several historic structures in the East Village of Davenport. Then we worked our way over to Wilton where we captured the restored Wilton Depot and then ate our breakfast while enjoying the early morning and the view of this historic depot. 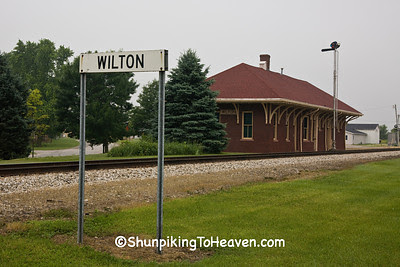 Around 7:00 am, we located the Candy Kitchen on Cedar Street and I began setting up my tripod. Then I noticed there was a man reading a newspaper on an outside staircase on the end of the Candy Kitchen building. When he looked up and realized that I was about to take a picture, he got up, saying he would get out of my way. And then he said, “What are you doing up this early in the morning?” I told him I had already been photographing for two hours and I apologized for disturbing his peaceful morning. He said he was just waiting for his friend to arrive. The Wilton Candy Kitchen building was built in 1856. In 1860, R.A. McIntire, an Irish immigrant, founded the Confectionery Ice Cream Parlor Soda Fountain, which shared the building with the U.S. Post Office from 1877-1893. Today, it is called the Wilton Candy Kitchen Ice Cream Parlor and Soda Fountain. Its owners, George and Thelma Nopoulos, proudly proclaim that it is the “oldest ongoing ice cream parlor/soda fountain/confectionery in the world.”

As I photographed the Candy Kitchen, I noticed that the friend of the gentleman who had been reading the paper had arrived and they were just hanging out down the street. So I walked over and started talking to them. When I asked them a question about the Candy Kitchen, one of them said, “Oh, you’ll have to ask George about that. There he is now.” As he said this, a small white car pulled up in front of the Candy Kitchen and an elderly gentleman got out. As we joined George, the owner, I pointed to the Candy Kitchen and said, “This is amazing,” to which George replied, “My wife is the amazing one.” 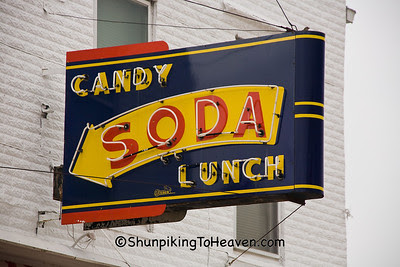 As George opened the doors of the Candy Kitchen, I noticed a sign on the door that said, “Open at 7:45 a.m.” We followed George inside and he began to turn on the lights. I asked him if I could take a few photos of the soda fountain. He said, jokingly, “OK, but don’t get too carried away,” meaning that I shouldn’t take too many pictures of him.

George’s father, Gus, a Greek immigrant, came to America in 1907 and learned the art of making candy, chocolate, and ice cream at his uncle’s confectionery store in downtown Davenport, Iowa. In 1909, Gus visited the little town of Wilton Junction (as it was known then) and discovered the confectionery store, which had recently closed. Gus took over the business and reopened it on June 10, 1910. He later married and had two sons, George and Leo. 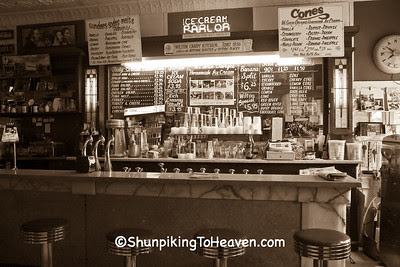 As George began getting things ready for the day, I set up my tripod to capture a shot of the old Tufts soda fountain and a long conversation unfolded. Unfortunately, I failed to get the names of the two gentlemen I had met outside, so I will refer to them as Gentleman 1 and Gentleman 2.

George: “Where are you from?”

George (smiling): “Oh, you’ve got a lot of cheese there.”

Gentleman 1: “They’ve also got a tavern at every crossroads.”

Gentleman 2: “Can you believe George is 91 and he still works seven days a week?” 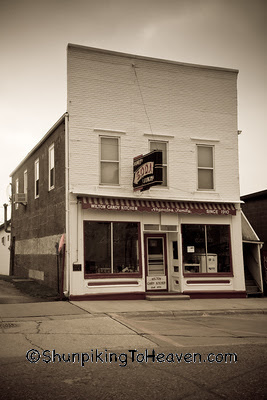 Somehow, the Candy Kitchen survived the Great Depression, but the candy- and chocolate-making stopped during World War II when sugar and chocolate became scarce. Help was also scarce at the confectionery when George and Leo went off to serve their country. After the war ended, George returned to Wilton and purchased the Candy Kitchen from his father, Gus. In 1949, he and Thelma were married and they continued working at the confectionery. As their family grew, they and their four children all worked together in the famous Candy Kitchen. 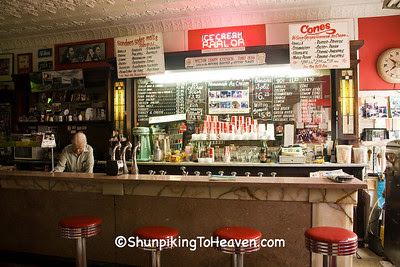 Joann (to the gentlemen at the counter): What do you two gentlemen order at this time of the day?”

Joann (to George): “When are you going to retire?”

Gentleman 2: “He’ll never stop working. With the prices he charges, he can’t afford to retire.”

Just then, the phone began to ring.

Gentleman 2: “That’ll be another tour company asking if they can stop with a tour bus.”

Gentleman 1: “They used to accept tour buses, but they can’t handle that anymore, so he turns down 60-70 every year.”

Joann (looking at the long list of soda flavors): “Oh, you have vanilla coke? I haven’t had a vanilla coke in a really long time. I’m going to go get some money from the car.” 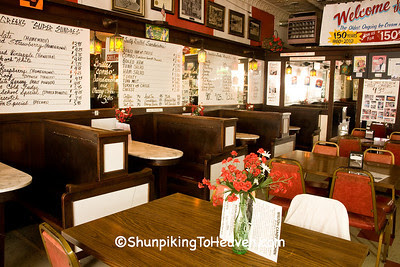 I put my camera and tripod in the car and asked Ruth if she would like something. She said that a cherry coke sounded really good. So I returned to the soda fountain with my money. I sat there watching George happily working behind the counter. Then he began to whistle the familiar tune, “He Walks With Me” as he went about his business.

Gentleman 2: “You’ll have to just tell him what you want or he won’t wait on you.”

Joann (jokingly, to George): “Are you going to get me a vanilla coke or not?”

George finished pouring cream into a cup of coffee and then, without a word, started making my vanilla coke. I told him to also make me a cherry coke for Ruth.

Gentleman 2: “You’re really going to like that. It’s the real deal.” 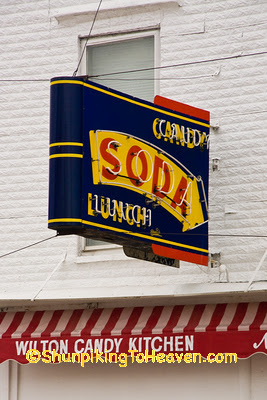 As I returned to the car, several more cars pulled up and everyone was heading into the Candy Kitchen. Even though it was still early in the morning, Ruth and I enjoyed our flavored cokes. I think they were especially good because they were made by the oldest (and happiest) soda jerk in the world.

If you’re ever in Muscatine County, Iowa, be sure to visit the Wilton Candy Kitchen. As the gentleman said, “It’s the real deal.”