In the back of my mind, I knew that Edsel was a very rare make of car, so when I was doing research for our trips and saw a picture of an old Edsel dealership sign, I knew we had to try and find it.

The first Edsel models were introduced on September 4, 1957 for the model year 1958. The last model year was 1960 when only 2,846 cars were produced. Ford announced the end of the Edsel program on November 19, 1959. In total, only 118,287 Edsels were built. The company lost $350 million, and the Edsel became best known for being a marketing disaster. 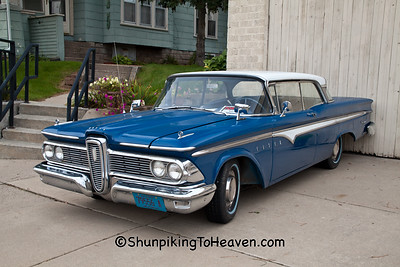 Our first opportunity to look for the sign came in 2013 on a trip to Ohio. This was the same trip where I was overly ambitious in planning our stops driving to Ohio. When we look at the collection of photos, it is spectacular, but knowing that I practically wore poor Joann out on the first day of our trip, I know better than to plan that many stops on our travels to and from our chosen photography state. (Or at least I try to keep it lighter. I can’t say I’m always successful, but in my defense, sometimes I say we’ll get a couple of things in town, and Joann is the one who wants to look up more things.) 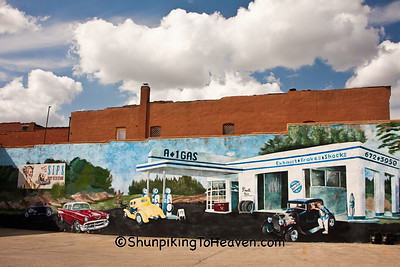 It was the morning of day 2 when we finally hit the town where I thought the Edsel sign was located. The problem is, even if it really was in town, I had no idea in what part of town. We found the downtown and started there. No luck. We went down my list of other locations around town, driving east and west, and north and south down the major roads. Still, no luck. We photographed other things as we stumbled on them.

Whenever Joann got out of the car to photograph something else, she asked anyone on the street if they knew of the sign. No one did.

We ended up back downtown, and Joann was just saying that she thought it was getting too late and that we had to leave without it, when a man mowing lawn across the street from where we were parked turned off his mower. She said she would ask him and if he didn’t know, we’d have to leave town without it.

But he thought he knew! He gave Joann directions, telling her that he apologized if he was sending us on a wild goose chase. But, he was right! We had been one block over from it, driving north on a one way street. Luckily, after Joann took photos of both sides of the sign, we could leave and continue on our way. (And only about three hours behind schedule.)

Now the problem was, we didn’t have an Edsel car to include in the story about finding the sign. Every time we saw old cars, Joann checked for an Edsel. Considering that they were only made for 3 model years, they are very rare and we never found one.

Then, just this fall, as we were driving around Sauk County, Wisconsin, Joann suddenly pulled over. I was looking down at the map, so I hadn’t even seen a photo opportunity. As she got out of the car to get her camera equipment, I asked what I had missed, and she said there was an old blue car, and she was running back to photograph it. 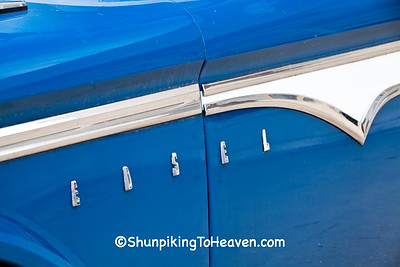 After a few minutes, she came back to the car and excitedly said “Guess what kind of car that was!” I said, “I have no idea,” since I hadn’t even seen a car at all, to which she replied “It’s an Edsel!” 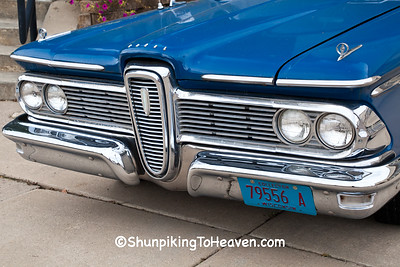 Hopefully, this will be one of those things where, now that we’ve seen one, we’ll see more of them. (One can hope!)