About a year ago, Ruth and I decided to do some photography fairly close to home. At 6:00 Sunday morning, we began exploring the town of Sun Prairie. Around 9:00, we captured a few images in the town of Marshall. By 10:30, we were in Waterloo, which is known as “Carousel City.”

First, we captured photos of much of Waterloo’s downtown historic district, but our main goal was to see if the vintage carousel in Firemen’s Park was operating that afternoon. Around 12:15, we drove to the park and stopped to appreciate the beautiful stone entrance, which appeared to be in a state of restoration. Then we located the 14-sided structure with a domed roof that was built in 1927 to house the historic carousel. It was closed up at that time, but next to it was a shelter, so we sat down to have our picnic lunch.

As we were eating our lunch, two women pulled up in a vehicle and parked next to our car. After sitting there for a while, the driver got out and asked us if the carousel would be running that afternoon. Her name was Becky and she had brought her mom Arlene, who had always wanted to ride the Waterloo carousel. We told her that we thought it was supposed to be open from 1:00 to 3:00, so we were hoping someone would soon come to open up the building and start the carousel. 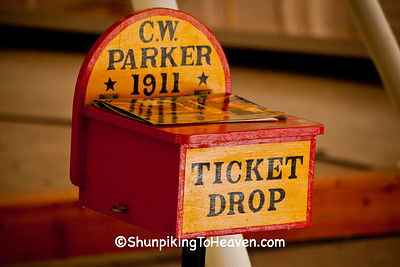 At 1:00, a gentleman named Bob Hanson, who looked a bit like Santa Claus, came to operate the 1911 C. W. Parker Carousel. This carousel has the original 28 wooden jumper horses and two chariots. It was purchased in 1925 by the Waterloo Fire Department from the Curtis Brothers Carnival, a traveling carnival based out of Cuba City, Wisconsin. According to the National Register of Historic Places Registration Form submitted in 1990, the purchase price was $1175, plus $137 to ship it to Waterloo. The carousel is now estimated to be worth nearly $1 million.

Bob started the carousel, with Becky and Arlene riding in one of the chariots. 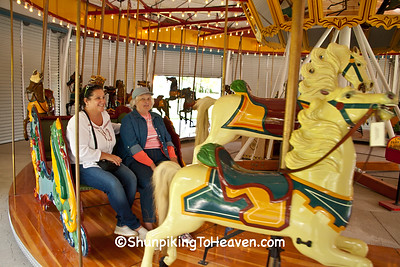 The smiles on their faces matched the happy tune coming out of the 1915 band organ from North Tonawanda Musical Instrument Works of New York. 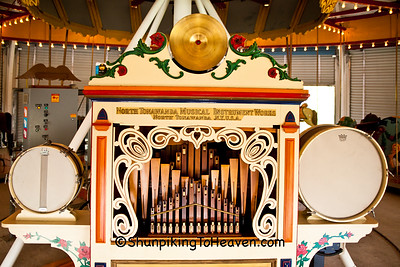 As Becky and Arlene rode the carousel for a second time, I chatted with Bob, who told me about a 93-year-old woman who had grown up in Waterloo and who had ridden the horses on the carousel for years. Finally, and only recently, she had decided it was time to start riding in one of the chariots rather than climbing up on a horse. He also told me about a 105-year-old woman who was born the same year the carousel was built, and who was still riding it every year.

After taking many photos of the carousel, the band organ, and the horses and chariots, it was time for me to take a ride. As I sat in a chariot waiting for the ride to begin, Becky came over and encouraged me to let her take my picture. So I agreed and handed her my camera. She took a couple of photos and then the music started to play and the carousel started to move. 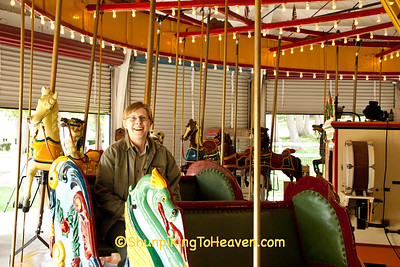 As it went around and around with the calliope-sounding music and the beat of the drum and crash of the cymbals, I felt like a kid again. And, at one point, the sheer joy of the experience brought tears to my eyes.

These tears were part joy and part appreciation for the efforts of so many people who had a hand in obtaining, maintaining, and restoring this rare carousel over the years. In 2008, after having provided so much happiness to so many people, the carousel was badly damaged when the Maunesha River flooded. The carousel, which was located near the river, was submerged under about four feet of water. Fortunately, the antique band organ was somewhere else being restored, so it was saved from flood damage.

So the Friends of the Carousel called on Lisa Parr, of Old Parr's Carousel Animals in Highland Park, Illinois, to restore the hand-carved wooden horses and chariots. As she worked on the restoration, she said that many of the carousels from the early 20th century were destroyed during the Great Depression, so this simple and portable carousel is a rare gem. It took three years and much money and effort, but the restoration was completed in 2011 and the carousel was put back into operation.

After my ride was done, I thanked Bob for the wonderful time and for sharing information with me. As I was leaving, I decided to snap a picture of the wooden plaque that was mounted on the building. At the top, in large letters, it said, “RULES For Your Safety & the Protection of This Carousel…. And some of the rules were: “Do not change horses or move around while carousel is in motion.” “No riding backward.” “Do not put your shoes on any part of horses.” And, probably the most important rule was “Do not pull on horses tails,” because the tails are made of real horse hair. Not to worry, I obeyed ALL the rules.

The Waterloo carousel operates every Sunday afternoon from 1:00 to 3:00, Memorial Day weekend to Labor Day weekend and for special occasions such as the 4th of July and Weiner & Kraut Day in September. The suggested donation is $1 per ride. If you’re in the area, treat yourself to some carousel joy!