It’s hard to believe next year will be 10 years since our first trip to the Ozarks. We went in the spring of 2008, and we’re just beginning plans to return.

On that first trip, we were going to visit Natural Dam Falls. It is just past the town of Natural Dam, but as is often the case, I missed the turn. The original Delorme Gazetteer for Arkansas wasn’t very detailed. A lot of roads were shown without names and the maps were very compact. Since I had missed the road that would have taken us to the falls, we had to find a place to turn around. 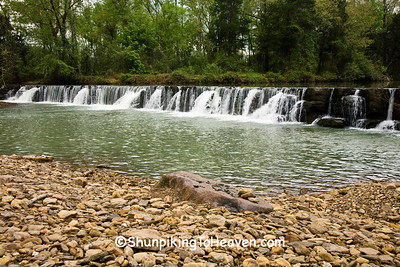 Before we left on this trip, as we often do when going to a new state, we picked a few goal birds and animals. I had picked elk ( “A Kodak Moment” ), armadillo ( “I Think We're Being Followed” ), and Greater Roadrunner, and since I told Joann that Scissor-tailed Flycatchers were more common in Arkansas than Wisconsin, Joann picked that as her goal bird. Joann had already seen armadillos and roadrunners in Texas but on my only visit to Texas, since I was only on the coast, I hadn’t seen either of those.

The first place we found to turn around was a small dead-end road, and as Joann turned onto it, there was a flash of bird wings as a bird flew up from and back down onto the pasture fence a little ways down the road. We could see it had a long tail, and I grabbed my binoculars which always sit in the corner of the dash. I couldn’t believe my eyes. It was the Scissor-tailed Flycatcher from Joann’s goal list! She grabbed her binoculars, and we both sat in awe watching it for a while.

Then Joann quietly got out of the car to get her camera. The bird scared up, but returned to the fence, allowing Joann to get a couple of pictures of it. 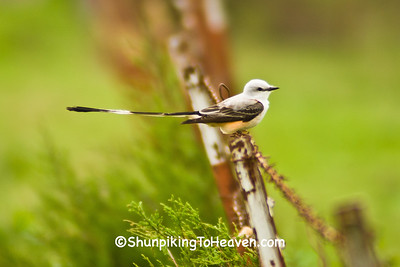 And then we noticed a bonus from the universe. Out in the pasture with the cattle was a flock of Cattle Egrets. This bird can occasionally be seen in Wisconsin, but was less common in 2008 than it is today. This year, for instance, there are two flocks hanging around in Brown County, Wisconsin. 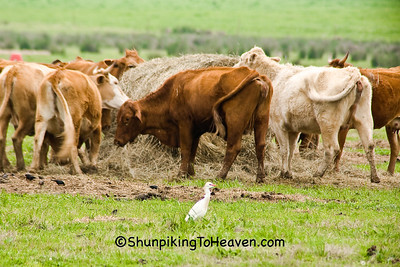 When you see one of these birds, you usually see more, and they are often seen around cattle, thus their name. Sometimes you even find them on the backs of the cattle eating insects off of them. Unlike other herons that you find around water, these are normally found in fields and dry areas stalking insects. 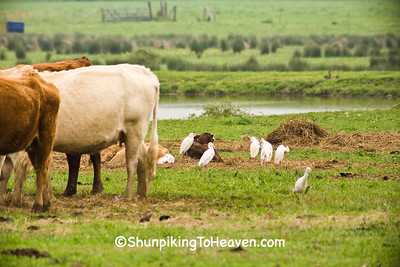 Once we had our fill of the birds, we got back in the car and drove back up the highway to the turn for Natural Dam. It was plainly marked with a sign on the highway, at least when driving north.

Natural Dam is exactly as its name implies; a natural dam that spans the entire width of Mountain Fork Creek. It isn’t very tall, but it is still impressive. Plus, it is extremely accessible, and can even be viewed from your car. It sits next to a National Forest picnic area.

It was late afternoon when we visited, so we just enjoyed the sight and the sound of the falls while Joann took her photographs.

Later in the trip, we even managed to see a Roadrunner. It was on our way into the mountains, so we figured the Greater Roadrunner would have to wait until another trip. But then, as we cruised down the road, one ran across the road. Joann quickly pulled over and jumped out. She managed to get one photo before it flew down into a pasture and ran off. (They can run 20 miles per hour, so one shot was good!)

If you ever happen to be in the Van Buren area of Arkansas, look up Natural Dam. It’s extremely easy to find and visit, and if you like nature, waterfalls are some of the most relaxing places to visit.

Be warned though, once the weather is warm, most easily accessible waterfalls will be filled with people swimming, wading, and sunbathing on the rocks.