The first time Joann and I visited the Island Church (also called St. Wenceslaus Church) was in January of 1999. It had just snowed, and although the roads were clear, the shoulders were not, and there was no place to park for most of our photos. We would pull up to a stop, Joann would jump out with her equipment and I would drive down the road, waiting somewhere for her until she signaled, and then I’d drive up and she would hop back in.

The little church celebrated its 150th anniversary in 2013 and is listed on the State and National Registers of Historic Places. It is also a Wisconsin Registered Landmark.

On February 18, 1863, Anton and Therezia Christel sold 1 acre of land for the church to the first Bishop of the Diocese of Milwaukee for $35.00. The land was on a hill and was surrounded by deep, boggy wetlands with one access road.

The Waterloo Area Historical Society says the church was founded and built by migrants who were mostly Roman Catholics from Bohemia and Germany.

The little church is 32 X 24 feet and was made of log and timbers. After about 20 years, the church was sided to protect it from the weather. 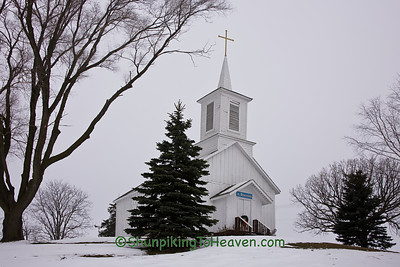 The first priest was Father Hubert Jansen who came from Jefferson. Mass was held about every four weeks. On Sundays when no mass was held, parishioners would gather and a member would read scripture passages and lead prayers.

In 1891, the Island Church priest was Father Francis X. Hess. He moved to the newly completed St. Joseph Catholic Church in Waterloo, and the congregations were merged. Regular services at the Island Church ended shortly thereafter. 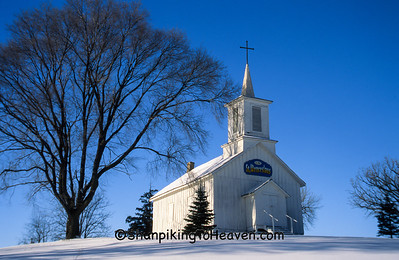 The small St. Wenceslaus Church Cemetery was first used in 1865 and is located just behind the church. 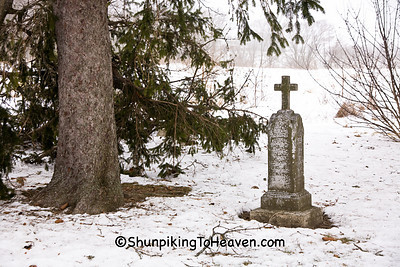 In 1970, an article appeared in a Milwaukee newspaper saying that the church had been given to the Wisconsin Historical Society to be moved to Old World Wisconsin near Eagle. Several area residents formed a committee to preserve the church on its original site. The group is known as the Island Church Foundation and they were successful in keeping the church at its original location.

Services are held twice a year at the church. On the second Sunday in July, the church holds a nondenominational service, and on the fourth Sunday of September a Catholic Service is held in celebration of St. Wenceslaus Day.

Our first two visits to the church were almost 10 years apart, and were both winter visits. But finally, in August of 2016, we visited on a gorgeous August Day. This time, without snow on the ground, Joann was able to walk around the church and back to the old outhouses.

There is also a tree swing hanging from a big tree behind the church.

Finally, just a couple of weeks ago, we visited the church when the doors were open. It was our first time to visit when Joann could take some photos inside.

The entryway has a viewing spot in the wall where the original logs can be seen.

The church still has the original unpainted pine pews that were made by an early parishioner. In the aisle between the pews, stands the original small iron stove with extended stovepipes.

The original confessional is still there in the corner.

Everything inside remains just as it was when the last mass was held. The altar still stands with its candlesticks and other religious articles. On the walls, the pictures representing the Stations of the Cross still hang just as they did when the church was in use.

Even with how small the church is, there was a choir loft raised about three feet above the floor. 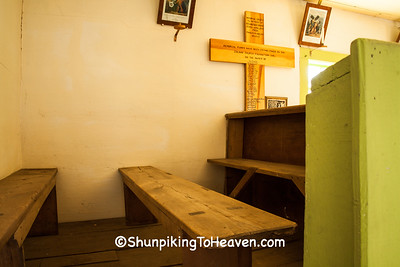 You can visit the church and cemetery at any time, but if you’d like to visit for a service or view the inside of the church, follow them on Facebook. Events at the church are listed when they are scheduled.