Learnin’ and Dancin’ in Raleigh, Indiana

In April, 2013, Ruth and I passed through Rush County, Indiana on our way to photograph for several days in the beautiful state of Ohio. Our goal in crossing this county was to visit the ruins of Raleigh School. 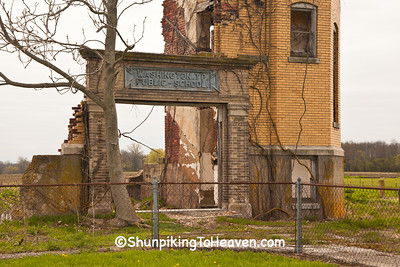 Known as Washington Township School, its life began in 1877 as a red brick, three-room grade school. At first, there were only two teachers for 140 students in these three rooms. Some of the children traveled to school on horseback, so there was also a barn where their horses could be kept while they attended school. 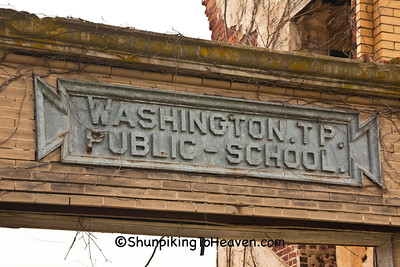 William S. Hall, Trustee of Washington Township, had come up with the plan to consolidate several one-room schools into Raleigh School, which is known as the first consolidated school in the nation. On the lawn, in front of what was left of the school, sat a boulder with a bronze plaque mounted on it. The plaque read: This marks the site of the First Consolidated School in Indiana. Established 1876 by William S. Hall, Trustee of Washington Township. "Our school was the first, make it the best." Erected by Tuesday Study Club, 1927.

In 1906, the original building was replaced with a yellow brick high school building, which operated until 1955, followed by a few years of serving grades one through six. In 1968, the school was closed. Two years later, it was sold to a local farmer, with the provision that it be torn down. For some reason, it wasn’t completely destroyed. Still standing is the entrance and the belltower. 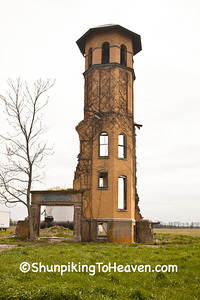 After photographing the school ruins, we drove towards the small crossroads town of Raleigh. At the edge of town, just down the road from the school, a man was mowing his lawn, so we stopped to talk with him. He told me his name was Luther, he was 78 years old, and his wife had attended Raleigh School. He also said that there was an upcoming Raleigh School reunion to be held at the dance hall in Raleigh. And then he explained how the dance hall, built in 1947, came to be. 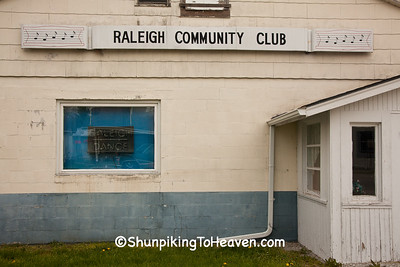 After the end of World War II, when the people of Raleigh were getting back to their lives, they were reminiscing about how they used to roll up the rug in someone’s living room, turn on some music, and dance. Marion Miller, owner of the only service station in Raleigh, suggested that they hold a dance at the service station. They could dance on the concrete around the pumps.

They rounded up a piano, which was played by local pianist Mildred Miller, along with a couple of guitar players and square dance caller Donald Clausen. They danced that Saturday night away beneath the lights of the gas station and continued to hold dances there every Saturday night until it got too cold to dance outside.

Then they started making plans to raise the money to purchase a lot and building materials for a dance hall. They bought almost 700 bags of cement and close to 90 men worked together to mix the cement, pour the concrete floor, and lay the concrete blocks to complete the building. The men volunteered their time after work and on weekends. The women fixed meals to feed the hungry men. In 1973, they installed a hardwood floor, which was surely easier on the legs and feet.

The hardwood floor is still in use and dances are held there on Saturday nights. After we finished talking to Luther and were getting ready to leave, Luther’s wife came over to the car and reminded us that it was Saturday and there would be a dance that night. She urged us to stay for the dance, but we had places to go and photographs to capture. So, we told her to have a good time and we headed out of town, but not before we captured a couple of photos of their wonderful dance hall.

Photos in this blog post can be purchased as wall art, paper prints, downloads, phone cases, and keepsakes by clicking on the photo. You will be taken to the gallery website where you will see a big blue "BUY" button. Or to see all photos available, click on the "Browse Galleries" button on the menu at the top of this page. Thank you for your interest!
Posted by Shunpiker at 8:45 PM