(Note from Joann and Ruth: We are pleased to announce that our sister, Phyllis, will be joining us occasionally in telling the stories we love to share with you. We also plan to begin sharing some of our family history and photographs. We know you will enjoy reading her first blog post about a discovery she made recently in a local rural cemetery.)

Earlier this summer, Joann and I had a family photo session with our Aunts (our mother’s sisters). We’ve been meeting with them once or twice a year for the past few years to get their help in identifying the people and places in a large collection of family photos. A bonus is that the photos jog their memories about family stories and anecdotes! More recently, they have also been sharing a lot of family history information with us. The photo below shows our mother, Dorothy Barman (top left), with seven of her siblings, circa 1945. 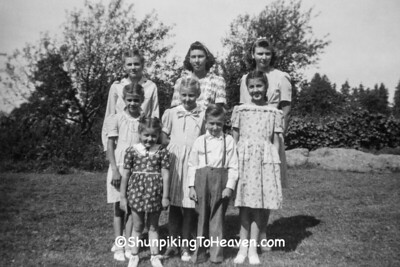 Part of the family history that we recently received included information about farms in the Township of Springfield in Dane County, Wisconsin, where our grandparents grew up. On a drive that my husband Vern and I took to locate those farms after that photo review session, we came upon an interesting little cemetery. Vern knows that I’m always interested in the stories that are told in old cemeteries so he asked if I wanted to stop. And, of course, I did. 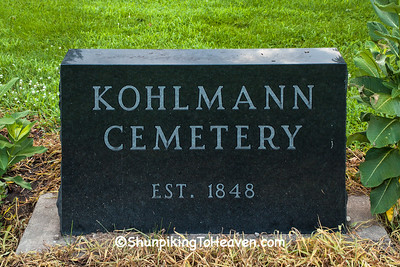 Right away we noticed the black granite Kohlmann Cemetery monument, indicating that the cemetery was established in 1848. As we walked through the small cemetery, we noticed a story on the back of the monument, which states that the cemetery actually has multiple names, including Methodist, Yankee, and Kohlmann Buckel Cemetery. 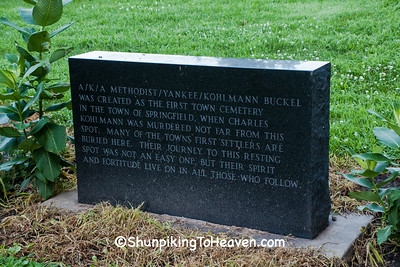 The back of the monument also indicates that the cemetery was created as the first cemetery in Springfield Township when a man named Charles Kohlmann was murdered near the spot he is buried. So, we walked around looking for his grave. Finding a black metal cross with his name on it, we noticed that it is somewhat unusual in that it actually says that he was murdered! His grave marker shows “Murd. 1848.” 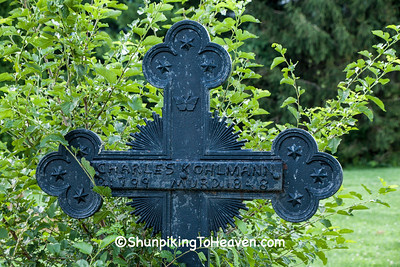 When we got home that evening, I decided to see what information I could find about that murder, which occurred back in the mid-1800’s in this rural Wisconsin community. I located several different sources, including some newspaper articles and a document prepared by the township, which all told the same story. Charles and Wilhelmine Kohlmann and their four children came to America in 1847 from Prussia, Germany. After arriving in America, the Kohlmanns came to Springfield Township, bought some farmland from the US Government, and settled into a new log cabin on the land. 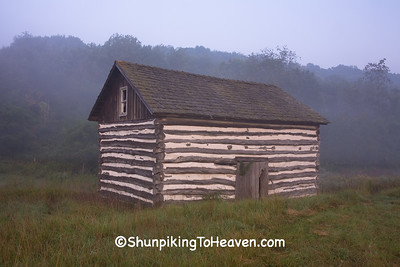 Soon after arriving in the area, Charles set out on foot for Milwaukee, Wisconsin, with a yoke of oxen and about $140 worth of gold coins. This was enough to buy a wagon and other necessities such as tools and household provisions. When Charles said goodbye to his family to leave for that lengthy on-foot trip, it proved to be the last time they saw him alive. And though his grave marker shows “Murd. 1848,” the articles and documents that I found indicate that he was actually murdered in October of 1847.

A local Madison newspaper article dated October 23, 1847 says that the oxen returned home without him on the afternoon of the day he left, which was Thursday, October 14. The article goes on to say that a search was initiated and it went on until the next Tuesday, when his body was found in some bushes about 100 feet off the road and less than two miles from his home. His throat had been cut and his money was gone. 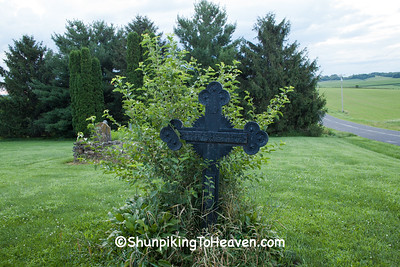 The article concludes by saying that various circumstances cast suspicion upon a man named Jacob Gross, a Frenchman living in the area. Apparently, a search turned up the missing money in Jacob’s possession. The article writer also says he was informed that Gross had confessed. Jacob Gross was arrested and placed in the local jail, awaiting trial.

The second newspaper article that I located was from May, 1848. It summarized the results of the trial of The United States vs. Jacob Gross. It turns out that the jury, after a brief deliberation, acquitted Jacob Gross to the dismay of many who believed he was guilty of the dastardly deed. There is no information to indicate that anyone else was ever tried for the murder. Jacob Gross continued to live in the township and is actually buried in the Kohlmann cemetery several feet away from the grave of Charles Kohlmann. When you’re out for a drive and come across an old country cemetery, stop and walk through it. You never know what stories may be told in those old cemeteries.

Posted by Shunpiker at 7:02 PM