When I was a kid, winter was my favorite season, probably because, unlike recent winters, there was a lot of snow most of the winter and we went sledding and ice skating, built snowmen and snow forts, and played games in the snow like Fox and Geese. As an adult, however, autumn has been my favorite season and I look forward to the fall colors all year.

In late September of 2012, we spent six days in Northern Wisconsin and the colors were stunning. We found ourselves saying, “Wow!” over and over as we found amazing color around every bend. It was definitely food for the soul! On the morning of September 30, we were in the Turtle-Flambeau Scenic Waters Area in Iron County at dawn. There was a light fog over the wetlands and an unmatched serenity as I stood soaking in the misty fall colors which were reflected in the water.

In 2017, we found some beautiful sumac in late October at Indian Lake County Park in Dane County, Wisconsin. The sumac colors are often finished by that time, so it was a pleasant surprise. It was foggy that morning, too, and the grass was wet. Still, I climbed up a steep embankment to get above the color. Getting up that high allowed me to capture Halfway Prairie Wildlife Area, with the Matz Farmstead stone ruins, in the background. 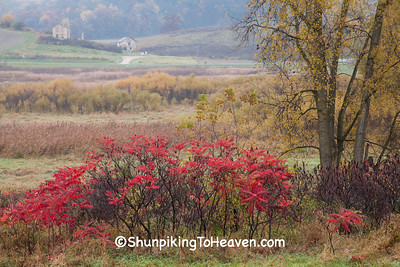 This fall, it was a challenge to find the expected fall color, which didn’t appear at the usual time. We headed out a couple of times in late September and early October, only to be disappointed by the lack of color. Finally, around October 18, the color showed up in Sauk County so we hit the backroads in search of a few scenes. A short distance from my house, we realized that it was going to be a beautiful sunrise, so we discussed our options quickly and headed down the road about a mile to capture a farm silhouetted against the blazing orange and yellow sky. This wasn’t the type of fall color I was looking for, but it was an awesome start to the day. 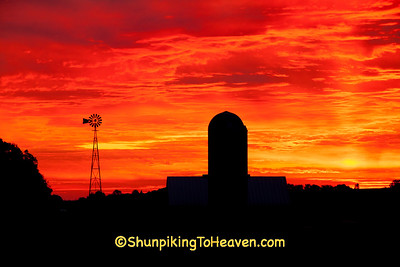 Our first stop in Sauk County was near Ski-Hi Orchard. There, a rusty old Studebaker truck sat among the fall grasses. We had seen it a couple days earlier and had planned to photograph it after capturing a historic log cabin, but then had forgotten. After that, I ran into Ski-Hi for some apple cider. And, no, I didn’t buy any apple cider donuts or caramel apples. But don’t credit me with willpower because it was only 8:00 a.m. so those weren’t available yet. 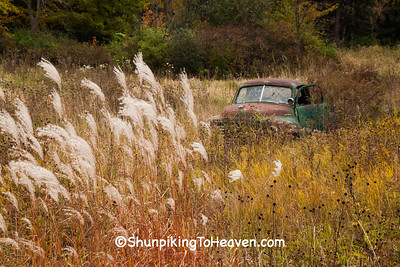 From there, we headed over to Durward’s Glen, a very special wooded retreat that is on the National Register of Historic Places. The trail that begins across from the parking lot immediately forks. First, I took the left fork and headed to the glen. I was grateful for the overcast lighting, which avoided harsh shadows on this beautiful place.

After hiking several trails in that direction, I backtracked toward the parking lot and took the right fork. This trail takes you past the Stations of the Cross on the way to St. Mary’s of the Pines, a stone chapel built in 1866. There is also a cemetery behind the church. The fall color on this trail was wonderful.

We left there and headed over to one of our favorite churches, St. Paul’s Evangelical Lutheran Church. But when we got there, a car was parked in the short driveway and a photographer was taking pictures. We decided to drive past and look at a few other things and then return. I made a mental note of the cornfield to make sure that I captured that view when we came back.

While stalling around to give that other photographer time to finish, we stumbled on a fall harvest scene with a long row of grain wagons parked along the edge of the cornfield. The farmers are having a hard time with their harvests due to all the rain, which resulted in very muddy fields.

We’ve learned not to question the Universe when it delays or reroutes us. In this case, we returned to the church from a direction that was different from our usual approach. This allowed me to spot a very nice composition from a hill that we usually drove in the opposite direction. And the fall color in the Baraboo Hills beyond the church was lovely. There is a sign above the church doors that is in German. It says, “Ev. Luth. St. Pauli Kirche, 1878.”

We decided to have our lunch while we sat in the peaceful surroundings of this historic church. The weather forecast had called for brief rain showers that would move through quickly starting around noon. Just as we finished our lunch, it started to rain. We moved on, counting on the rain to do the same. We drove to Seeley Lake to capture the dam and, hopefully, some fall color. But the rain began to increase and showed no sign of stopping. So, out came the umbrella for this shot. 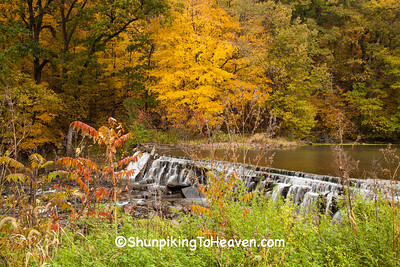 Still hoping that the rain would pass through as predicted, we moved on, but it continued to rain heavily for the next hour, so we worked our way home. One of the last things I captured, also under an umbrella, was this Halloween display. I hope you got out there to enjoy the fall colors such as they were this year. Happy Halloween, everyone!

Posted by Shunpiker at 7:59 PM